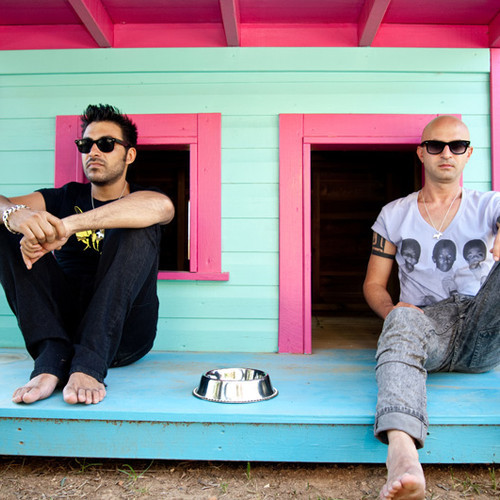 Tommy Paone and Marco De Gregorio started playing separately in the early nineties in South Italy when they began buying vinyls. They are both coming from Catanzaro, Calabria but they met in Florence in the year 2000 where they agreed on a new exciting project called NEVERDOGS.
The duo adapted to the musical trends and managed to achieve residencies for the most famous clubs in Italy such as Tenax (Florence) and DocShow(Bologna). In 2004 musicians Alessio Monizza and Davide Ruberto joined them in breaking the electronic/dance circuit and help them build a strong reputation as DJ’s and producers.
Neverdogs gained the public’s attention in the summer of 2005 via a collaborative project with Italy’s most sought after event called the DocShow (a decadent mix of music, art and performance). The summer of 2006 found them relocated in Ibiza, the hottest and toughest destination of electronic music, where they gained residencies and regular appearances for Privilege, Space, Zoo Project and Underground.
By the year 2009 Neverdogs are already dominating Ibiza’s music scene playing for the famous Katamaran parties hosted by Sexy’n’Chic alongside big names such as Ricardo Villalobos, Jose de Divin, System of Survival, etc.
Neverdogs gained their reputation in the underground scene and influenced the industry circles through their dynamic sounds by being present at the most selective gatherings in Italy, Ibiza, London, Miami, and Punta del Este (Uruguay). They became regulars of the globe’s finest establishment and parties, playing alongside various artists such as Loco Dice, Behrouz, Tania Vulcano, Dan Ghenacia, Shonky, Audiofly, Luna City Express, Lucio Aquilina, etc.
Their first material produced was shared with selected names of the industry such as Satoshi Tomiie, Pascal Feos, Steve Lawler that started appreciating their work instantly. Their productions were released for big labels such as Idea and Eukatech Records and also featured in Richie Hawtin, Timo Maas and Bushwacka!’s playlists.
Following a winter tour in 2011/2012 in South America and many other exquisite events in Europe, Neverdogs have played alongside Craig Richards at Tenax (Italy) and at Move On Festival in Uruguay. The summer season of 2012 caught them playing for the famous Music On party in Amnesia Ibiza hosted by Marco Carola and also for Senses parties hosted by Sexy’n’Chic at Ushuaia Ibiza.
2013 shapes up to be a great year for Neverdogs with a successful residency at Vanilla Ninja in Moscow, DocShow in Bologna and Egg London but also with a great performance at Miami Music Conference with Music On at Nikki Beach. The artists managed to play for various famous private parties such as Naomi Campbell’s partner’s birthday party in Jodhpur, India where they have played after special performances from Diana Ross, Jamiroquai, Billy Idol and Brian Ferry.
The summer of 2013 caught them playing for the second year for the most famous party of Ibiza entitled Music On and hosted by Marco Carola in Amnesia. They ended playing for the closing party for Amnesia in October, and also for the special opening of Amnesia for the New Years Eve next to Marco Carla, Jamie Jones, Marc Antona, Pan-Pot, Mar-T.
After a great and influential year, 2014 comes with special performances for BPM Music Festival in Mexico at Mamitas Beach Club for Music On next to Marco Carola and Joseph Capriati and at the closing party of the Festival that was specially organised just for all the promoters and artists worldwide.
In February, Neverdogs were special guests for Music Week Festival in Florianapolis, Brazil where they played twice alongside Andrew Grant (DC10). After this amazing event the artists also performed in D-Edge Club in Sao Paolo, Brazil, one of the most famous underground clubs in the world.
Neverdogs return to Europe for tours around Italy, Switzerland, Spain, and London for Music On after-party that was a great success.
The summer of the year 2014 will be the third summer of their residency for Friday’s most famous party in Amnesia Ibiza, Music On.